The Surrey Electronics and Amateur Radio Society (EARS) 434 MHz balloon flight was the top news story on the front page of the Surrey Advertiser newspaper.

On Sunday, May 4, the Surrey EARS team launched a High Altitude Balloon from Cambridgeshire carrying University of Surrey mascot Stevie Stag. The balloon had a flight time of around three hours, reached almost 100,000 feet and travelled just over 70 miles including a portion of the ascent right over the city of Cambridge. The transmissions from the balloon on 434 MHz were received in the UK, France, Netherlands and Germany.

After the launch EARS auctioned Stevie Stag, the only Stag to fly to the edge of space, on eBay to raise money for the mental health charity Mind.

Steve G8KHW planned to launch five balloons XABEN64-68 carrying 434 MHz payloads from Elsworth on Wednesday, March 12. The permit for them arrived at the last minute on Wednesday morning. Technically the flights need a permit despite being 100g balloons as they are on a line rather than mounted in the neck.

Steve says: The plan is to launch 5 identical payloads on 5 identical 100g balloons as near identically filled as I can manage in order to see the sort of spread of burst altitudes. The balloons will be launched as quick as I can fill them and launch them – so its likely that all 5 balloons will be in the air at the same time.

With all those flights I’m going to need some help tracking them – so lots of listeners would be appreciated. Callsigns and Frequencies to follow on the UKHAS Mailing List – but all will be on 434 MHz with standard 50 Baud 470 Hz 7N1 RTTY.

There should be a launch from Westcott, Buckinghamshire on Wednesday at 12.00 Callsign: BALYOLO Frequency 434.500 MHz.

Project Ascend are launching Wednesday at 0900 from Cockermouth,Cumbria. They say please listen out for us on 434.450 MHz USB,  Callsign HAB55331. Further information at http://projectascend.co.uk/

Dave Akerman M6RPI/M0RPI says he’s planning to launch at around 2pm on Thursday, it’ll be a regular payload up-burst-down, probably with 2 trackers. The launch will take place from the field behind Dave’s new house just north of Ross-On-Wye, so receivers in the west of England will be particularly welcome. No SSDV just 50 baud RTTY telemetry. There will be live video streaming of the launch and chase at http://www.batc.tv/streams/m0rpi_chase

On Thursday, March 13 Adam Cudworth will be launching HABE 12 from Worcestershire on 434.200 MHz.

Check the IRC channel for chat about the launches on irc.freenode.net #highaltitude
A web client is available at http://webchat.freenode.net/?channels=highaltitude

Mark and Cassie of STRATODEAN

BBC TV News has reported on the 434.075 MHz STRATODEAN balloon carrying Santa and Rudolf that was launched from Coleford, Gloucestershire, UK.

The BBC say that amateur scientists Cassie Phelps and Mark Ireland, from the Forest of Dean, successful launched Santa and Rudolf into near-space 30 km above the Earth.

STRATODEAN report that when Santa finished off the modifications to the 2013 sleigh like all good engineers he opted to test the new changes before rolling it out into production and went to STRATODEAN for help! (It’s been a very well kept secret that they provide technical facilities to all their famous mythical friends. The Tooth Fairy and Easter Bunny are already well established customers.)

They were given a clear project remit – to take him up and down on their payload to allow him to test the new handling abilities of his sleigh. Apparently the cost of reindeer propulsion (magic flying dust) has skyrocketed in the last few years and he can only justify the once a year purchase for Christmas due to Mrs Clauses’ bingo habit and the increasing Elf wages. Furthermore, for this test he can only bring Rudolf as the other reindeer are getting on a bit and they need to save their knees.

Watch the STRATODEAN video of the flight 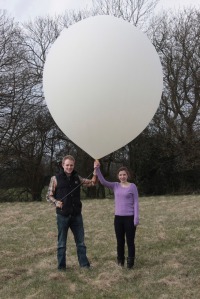 Mark and Cassie with a STRATODEAN High Altitude Balloon

Read The Telegraph story at
http://www.telegraph.co.uk/topics/christmas/christmas-videos/10529615/Santa-and-Rudolph-spotted-in-orbit.html

A video of the STRATODEAN High Altitude Balloon Presentation given by Cassie Phelps and Mark Ireland to the annual AMSAT-UK International Space Colloquium in Guildford last July can be seen at
https://amsat-uk.org/2013/07/22/video-of-stratodean-high-altitude-balloon-presentation/

The CubeSat, callsign KB3VTP-11, was planned to be launched as part of the Civil Air Patrol’s Maryland Wing Rocketry Day on Sunday, October 20, 2013 using APRS on 144.390 MHz FM.

This was the second mission for the Civil Air Patrol, High Altitude Stratospheric Experiment or C.H.A.S.E. The first mission CHASE-I had the goal of capturing images of the stratosphere.

The goal for the second mission CHASE-II is to repeat the success of the first mission in CubeSat form with additional sensors. The second CHASE mission also seeks to exceed 30480 meters in altitude. However, the main purpose of the mission is to be a Science, Technology, Engineering, And Math (STEM) Aerospace Educational activity for Civil Air Patrol cadets.

Radio amateur Jonathan Trappe KJ4GQV attempted to cross the Atlantic in a cluster balloon carrying beacons on 14.0956 MHz and 144.390 MHz.

At around 1200 UT on Thursday, September 12, 2013 Jonathan KJ4GQV took to the air from Caribou in Maine in a lifeboat suspended by some 370 helium balloons. His flight came to a premature end when he had to land in Newfoundland reportedly near Blow Me Down Provincial Park. 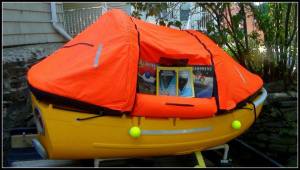 APRS on 144.390 MHz FM was transmitted while over the US/Canada using the callsign KJ4GQV.

The balloon was launched from Silverstone and aims to test some solar power modes and check for altitude stability.

The expected flight path is at http://ready.arl.noaa.gov/hypubout/15224_trj001.gif

Downlink data contains of two lines of telemetry every ~2 minutes during the daytime and ~5 minutes in the night.  The time between data is filled with beeps at 3 sec intervals.

Pico balloons are proving increasing popular with amateurs. The small foil party balloons can only carry ultra light balloon payloads, typically weighing less than 100 grams. This presents a challenge to the builders to produce a transmitter, GPS, batteries and antenna that are small and light enough to be carried.

Balloons such as these do not go to extremes of altitude but can float at between 3,000 and 7,000 metres for an extended period. The 434 MHz transmitters can have a radio range of 300 km.

Real-time track of B-11 and other balloons http://spacenear.us/tracker/