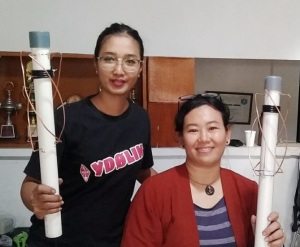 The agenda of this workshop consists of theory and practice. Theoretical material includes the introduction of amateur radio satellites in general, the introduction of LAPAN-A2 / LAPAN-ORARI (IO-86) satellites and satellite tracking techniques. Whereas practical material includes making a Quadrifilar Helicoidal (QFH) antenna and communication with the LAPAN-A2 / LAPAN-ORARI (IO-86) satellite.

After the theoretical material was finished around 11:30, the program continued with the practice material for making QFH antennas. The materials for making the antenna provided by the committee included copper capillary pipes, 1 1/4 PVC PVC pipe, RG-58 cable, BNC connector and paper clips. Meanwhile, the equipment for making antennas was carried by each participant, such as solder, scissors, pliers, drill, and others. The atmosphere became even more exciting, because in making this QFH antenna there were separate challenges, especially in the RG-58 cable connection to the antenna element.