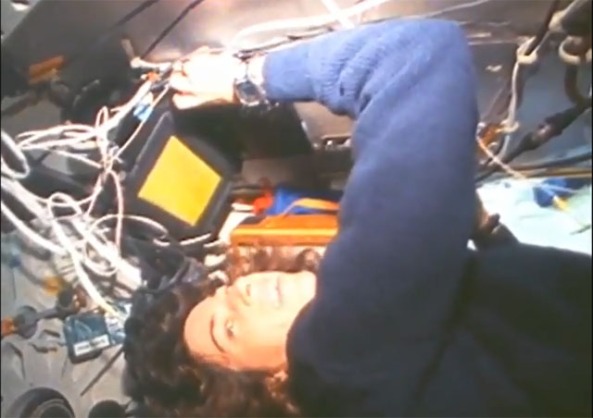 The crew of STS-56 made numerous amateur radio contacts to schools around the world using the Shuttle Amateur Radio Experiment II (SAREX II), including brief radio contact with the Russian Mir space station, the first such contact between Shuttle and Mir using amateur radio equipment.

Ellen Ochoa KB5TZZ was the first Hispanic woman to go into space. She went on to complete four space shuttle flights and become Deputy Director of the Johnson Space Center.

The primary payload of the flight was the Atmospheric Laboratory for Applications and Science-2 (ATLAS-2), designed to collect data on the relationship between the sun’s energy output and Earth’s middle atmosphere and how these factors affect the ozone layer. It included six instruments mounted on a Spacelab pallet in the cargo bay, with the seventh mounted on the wall of the bay in two Get Away Special canisters.

Narrated by the Commander and crew, this video contains footage selected by the astronauts, as well as their comments on the mission. Footage includes launch, onboard crew activities, and landing.

The amateur radio aspect of the mission features at 09:58 into the video.

Girls from Ashford School in Kent with their Space Experiment

Spacelab-J—a joint NASA and National Space Development Agency of Japan (NASDA) mission using a manned Spacelab module—conducted microgravity investigations in materials and life sciences. The international crew, consisting of the first Japanese astronaut to fly aboard the Shuttle, the first African-American woman to fly in space and, contrary to normal NASA policy, the first married couple to fly on the same space mission (Lee and Davis), was divided into red and blue teams for around the clock operations. Spacelab-J included 24 materials science and 20 life sciences experiments, of which 35 were sponsored by NASDA, 7 by NASA and 2 collaborative efforts.

Also on board were two experiments prepared by Ashford School in Kent which, at the time, was a girls-only school. The school in the UK who had won a competition run by Independent Television News (ITN). The experiments were contained in G-520. The first one injected a few grams of cobalt nitrate crystals to a sodium silicate to create a chemical garden in weightless condition. The growths, which were photographed 66 times as they developed, spread out in random directions twisting and in some cases forming spiral shapes. A second experiment to investigate how Liesegang rings formed in space failed to operate correctly due to friction in parts of the mechanism. On its return the experiment was exhibited in the London Science Museum..

The 1992 space shuttle STS-50 mission was the first time that astronauts received an amateur radio fast-scan television video. It was sent by the ham radio club station W5RRR at the Johnson Space Center (JSC).

Narrated by the Commander and crew, this video contains footage selected by the astronauts, as well as their comments on the mission. Footage includes launch, onboard crew activities, and landing.

The amateur radio aspect of the mission gets a mention at 11:32 into this video. 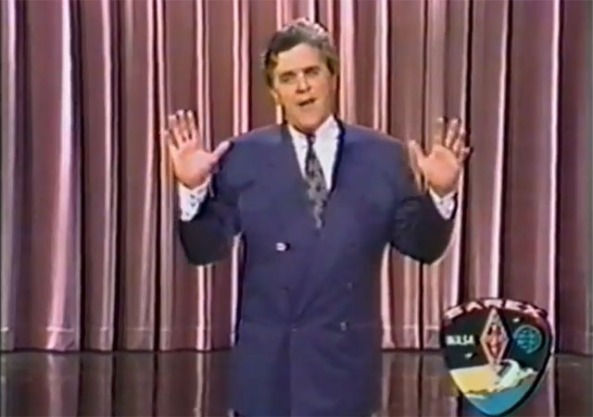 The second ham radio transmissions by an amateur radio operator in space were made by Tony England W0ORE during the Challenger shuttle mission STS 51-F in 1985.

He achieved the first ever two-way Slow Scan TV (SSTV) space contact during the flight when he contacted GB3RS the headquaters station of the Radio Society of Great Britain (RSGB).

Tony W0ORE was running a Motorola model MX-340 handheld 2-meter transceiver and a Robot Research model 1200C slow-scan television scan converter with an antenna fitted on the inside of one of Challengers windows.

Narrated by the Commander and crew, these videos contains footage selected by the astronauts, as well as their comments on the mission. Footage includes launch, onboard crew activities, and landing. The Shuttle Amateur Radio Experiment (SAREX) is mentioned 11:40 into the video.

Videos taken by a local TV station, of a contact between a school in Staten Island, NY and Tony England W0ORE on STS-51F can be seen at http://www.southgatearc.org/news/january2009/historic_shuttle_videos.htm

John Magliacane KD2BD was one of the amateurs who had a contact with Tony England, see his website at http://www.qsl.net/kd2bd/kd2bd.html

STS-51-F (also known as Spacelab 2) was the nineteenth flight of NASA’s Space Shuttle program, and the eighth flight of Space Shuttle Challenger. It launched from Kennedy Space Center, Florida, on 29 July 1985, and landed at Edwards Air Force Base, California, just under eight days later on 6 August 1985, at 12:45:26 pm PDT.