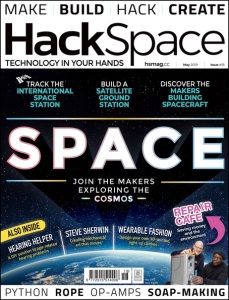 The May edition of HackSpace magazine, issue 18, featuring articles by radio amateur Jo Hinchliffe MW6CYK is available as a free PDF.

On pages 34-47 is his special feature on Space, which explains how you can build a SatNOGS satellite ground station to receive amateur radio satellites.

Also in the magazine, on pages 96-99, Ben Everard explains how to build an ISS count‑down timer.

You can download the free HackSpace magazine PDF from
https://hackspace.raspberrypi.org/issues/18

Direct link to the PDF
https://magazines-static.raspberrypi.org/issues/full_pdfs/000/000/072/original/HackSpaceMag18.pdf

SatNOGS won the Hackaday grand prize of $196,418 for their satellite ground station, they plan to give the money to the Libre Space Foundation.

The Libre Space Foundation (LSF) is a non-profit foundation registered in Greece by the creators of the SatNOGS project. The aim of the foundation is to promote free and open source technology in space and support, develop and fund space projects.

Ground Stations are Just the Beginning: The SatNOGS Story
http://hackaday.com/2015/02/19/ground-stations-are-just-the-beginning-the-satnogs-story/

Six months ago Hackaday challenged their readers to realize the future of open, connected devices, The prize was a ticket to travel into space. The winners were announced at the Electronica trade show in Munich on November 13.

The SatNOGs project is a thrilling example of the benefits of a connected world. It opens up the use of satellite data to a much wider range of humanity by providing plans to build satellite tracking stations, and a protocol and framework to share the satellite data with those that cannot afford, or lack the skills to build their own tracking station. The hardware itself is based on readily available materials, commodity electronics, and just a bit of 3D printing.

Two of the five finalists for the Hackaday Prize involve amateur radio, the prize is a ticket to travel into space.

Six months ago Hackaday challenged their readers to realize the future of open, connected devices. They have now announced the five finalists vying for The Hackaday Prize.

The SatNOGS project involves a network of satellite ground stations, they are using crowdsourced data collection for something that is literally out of this world: listening to the ever-increasing number of amateur satellites orbiting the planet.
http://hackaday.com/2014/11/07/hackaday-prize-finalist-a-network-of-satellite-ground-stations/

PortableSDR is a completely stand-alone (no computer needed), compact, Portable Software Defined Transceiver. Originally designed for backpacking use by Ham Radio operators. It includes complete coverage up to about 30 MHz.
http://hackaday.com/2014/11/05/hackaday-prize-finalist-a-portablesdr/

The contest was open to entries from around the world with the exception of residents of Quebec, Italy, Cuba, Iran, Myanmar, North Korea, Sudan, Syria, or any jurisdiction where the Contest would be restricted or prohibited by law.

The winner of the Hackaday Prize for the best example of an open, connected device should be announced at the Electronica trade show in Munich on November 13.
http://hackaday.io/prize

Announcing the Five Finalists for The Hackaday Prize
http://hackaday.com/2014/10/13/announcing-the-five-finalists-for-the-hackaday-prize/