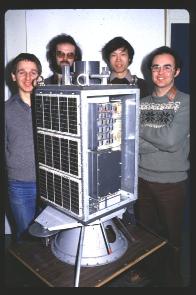 UoSAT-OSCAR-9 (UoSAT-1), developed at the University of Surrey by Martin Sweeting G3YJO and his team, was launched into orbit 40 years ago on October 6, 1981.

UoSAT-1 was the first modern microsatellite with in-orbit re-programmable computers and its signals were decoded and analysed by thousands of radio amateurs, schools & universities around the world.

Find out about the audacious favours Sir Martin Sweeting G3YJO called in to get UoSAT-1 off the ground in 1981, and the ingenious hack he used to vibration test it using a car and Guildford High Street!

Read the UoSAT-1 story at
https://www.sstl.co.uk/media-hub/latest-news/2021/the-story-of-uosat-1-ingenuity-teamwork-and-lots-o 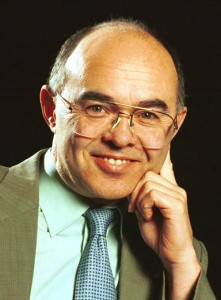 Radio amateur Professor Sir Martin Sweeting G3YJO, was the guest on the Radio 4 show The Life Scientific that was broadcast on Tuesday, April 20.

Martin Sweeting G3YJO pioneered the original SmallSats revolutions with the UOSAT-1 and UOSAT-2 spacecraft that carried amateur radio payloads and launched in the early 1980’s. They led to the founding of Surrey Satellite Technology Ltd (SSTL) of which he is Executive Chairman.

You can listen to, or download, an MP3 recording of the BBC show which mentions amateur radio and AMSAT from the BBC website at https://bbc.co.uk/programmes/m000v7pb

What is Amateur Radio? http://www.essexham.co.uk/what-is-amateur-radio

The Daily Mail newspaper archive from 1896 to 2004 is now available online and contains a wealth of stories about amateur radio and amateur radio satellites such as UoSAT-1 (also known as UoSAT-OSCAR-9 or UO-9) built at the University of Surrey in Guildford.

The amateur radio satellite UoSAT-1, built by Martin Sweeting G3YJO and his team, featured in a Daily Mail story The men who put a dream in space published Tuesday, October 13, 1981. The story is written with a sexist slant, sadly all too common at the time, saying “Every schoolboy can circle Earth with the Guildford satellite”. Apparently the Daily Mail didn’t want schoolgirls to listen to the satellite.

One of the many amateur radio stories the newspaper published is Amateur Radio Triumph that appeared on Friday, November 16, 1928. It describes the first Transatlantic contact between the UK and the USA which took place on the 28 MHz (10m) band.

Free access to the Daily Mail archive is only available until July 20, 2013 at
http://www.galeuk.com/trials/dailymail-opentrial/

Try searching for Amateur Radio or UoSAT or Marconi.

You can save the stories to your PC by selecting 100% zoom then doing a right-hand mouse click on the story and selecting Save Image As in Firefox or Save Picture As in Internet Explorer.

The original TV news reports about the United Kingdom’s first Amateur Radio satellites, UOSAT-1 (OSCAR-9) and UOSAT-2 (OSCAR-11), can now be seen on the web.

In ‘Talking Satellite’, made February 15, 1983, Martin Sweeting G3YJO talks about OSCAR-9 and its speech synthesizer.
The ITN description reads: “The World’s first talking satellite begins to speak. It was launched 18 months ago in America for the University of Surrey and one of its purposes is to encourage interest among school children in space technology.”
Watch it at http://www.itnsource.com/shotlist//ITN/1983/02/15/AS150283008/

In ‘British Satellite’, made February 7, 1984, Martin Sweeting G3YJO talks about OSCAR-11 due to be launched the following month.
The ITN description reads: “Staff at the University of Surrey have designed and built a spacecraft in 5 months after being challenged by NASA.  Intvw Dr Martin Sweeting, University of Surrey.”
Watch it at http://www.itnsource.com/shotlist//ITN/1984/02/07/AS070284011/

OSCAR News is published quarterly by AMSAT-UK and posted to members.
To get your copy join AMSAT-UK online at http://tinyurl.com/JoinAMSAT-UK/
Free sample issue at http://www.uk.amsat.org/on_193_final.pdf

Surrey Satellite Technology Limited (SSTL) celebrated the 30th anniversary of the launch of Surrey’s first satellite, UoSAT-1. Launched into orbit on October 6, 1981, UoSAT-1 was designed and built by a team from the University of Surrey led by SSTL founder Sir Martin Sweeting, G3YJO.

UoSAT-1 was also known as UoSAT-OSCAR 9. It was a scientific and educational low-Earth orbit satellite containing many experiments and beacons but no amateur transponders. UO-9 was fully operational until it re-entered October 13, 1989 from a decaying orbit after nine years of service.

UO-9’s mission scored several firsts for technology which would be incorporated into future amateur satellite missions including:

+ UoSAT-2 was designated as UO-11 which can still be heard operating on 145.825 MHz with a beacon transmitting 1200 baud using asynchronous AFSK.

More history can be found in an interesting article posted on the SpaceDaily.com website: http://www.spacedaily.com/reports/SSTL_celebrates_30th_anniversary_of_groundbreaking_satellite_UoSAT_1_999.html

Thanks to ANS and SSTL for the above information