’Fly Your Satellite!’ is an exciting new initiative from the European Space Agency (ESA) Education and Knowledge Management Office. It is focused on CubeSat projects run by university students and builds on the successful ‘CubeSats for the Vega Maiden Flight’ pilot programme, which culminated in 2012 with the launch of seven university student-built CubeSats on board the Vega Maiden Flight.

In the future, this new initiative is intended to cover the complete development process of a satellite from concept to launch. However, the 2013 edition will be dedicated to teams whose satellite is already at an advanced stage of development and able to complete the Flight Model assembly by June 2013. One, two or three-unit CubeSats are eligible. 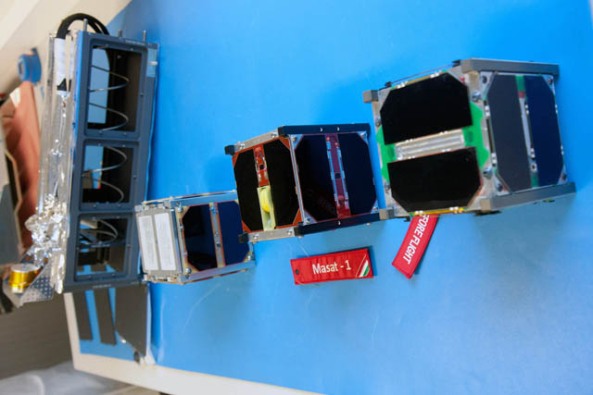 ESA’s Education Office is inviting the CubeSat community to send their notifications of interest for a new initiative involving the development of educational picosatellites and the provision of deployers and launch services. The call closes on 7 September 2012.

END_OF_DOCUMENT_TOKEN_TO_BE_REPLACED

Members of the XaTcobeo CubeSat team at the ground station

ESA have issued an update on the amateur radio CubeSats that were launched on February 13.

Since the launch ESA’s Education Office has maintained frequent contacts with the student teams to follow the progress of their satellite operations.

For each team, this is the first hands-on experience of operating an orbiting satellite, and some of them have had to deal with some challenging difficulties.

Read the ESA report at http://www.esa.int/SPECIALS/Education/SEM2KRGY50H_0.html

The Spring edition of the AMSAT-UK colour A4 newsletter OSCAR News is being posted to members this week.

You can get OSCAR News by joining AMSAT-UK online at http://tinyurl.com/JoinAMSAT-UK

AMSAT-UK is a voluntary organisation that supports the design and building of equipment for amateur sadio satellites. Its members are currently building the satellite FUNcube-1.

BBC Science correspondent Jonathan Amos reports that the European Space Agency is starting what it expects to become a regular series of small science missions.

“We want to hear from innovative people who’ve got a clever idea that doesn’t need a billion or half a billion euros, but can be done with a much smaller amount.”

Call for a Small mission opportunity in ESA’s Science Programme for a launch in 2017 http://sci.esa.int/2012-S-Call

Sabrina Corpino, Team Leader of the E-St@r CubeSat project, is interviewed by ASI TV about the CubeSat that was launched on February 13.