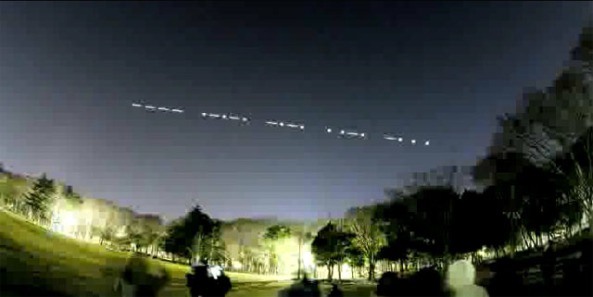 The amateur radio CubeSat FITSAT-1 (aka NIWAKA) carries an Optical Communications experiment that aims to write Morse Code across the night sky. The satellite is fitted with a bank of high power LEDs that will be driven with 200W pulses to produce extremely bright flashes that may be visible to the unaided eye.

FITSAT-1 was deployed from the International Space Station (ISS) at 15:44 UT on Thursday, October 4 along with F-1 and TechEdSat.

We have received a lot of signal and telemetry reports from amsat members. All reports show FITSAT-1 starts working and sound. Thank you very much for your help.

We will examine movements, temperatures, and battery states of FITSAT-1 during these 10 days, and start experiments of 5.8GHz transmission and flashing LEDs.

I will announce the experiments on my web-page http://www.fit.ac.jp/~tanaka/fitsat.shtml

FITSAT-1 – NIWAKAFITSAT-1 (NIWAKA) is a 1U CubeSat (10*10*10cm) developed by students at the Fukuoka Institute of Technology (FIT).

FITSAT-1 (aka NIWAKA) is a 1U CubeSat (10*10*10cm) developed by students at the Fukuoka Institute of Technology (FIT).

The primary mission is to transmit 115.2 kbps digital data on 5840.0 MHz using a transmitter capable of 2 watts output. The data rate is significantly higher than that of previous amateur radio satellites and will enable a VGA-size (640×480 pixel) JPEG image to be transmitted in only 5 to 6 seconds.

The second mission is to determine if a satellite can be made to appear as an “artificial star” using high-output LEDs in flash mode. The light from this flash will be received by the ground station, which has a telescope with photo-multiplier linked to a 5.8 GHz parabola antenna. This is a basic experiment to investigate the possibility of optical communication with satellites.

The 437.250 MHz CW beacon signal was activated 30 min after deployment. Please send the signal report, telemetry data (if possible) and your postal address to fitsat1@hotmail.co.jp and also cc to tanaka@fit.ac.jp. You will receive a verification (QSL) card [presumably electronic]. Initially the orbit will be almost the same as the ISS.

In addition to the CW beacon there is an AX.25 1200 bps packet radio transceiver on 437.445 MHz for telemetry and command purposes.

The FITSAT-1 CW beacon frequency 437.250MHz is on the same frequency as the PRISM micro-satellite built by students at Tokyo University. Please confirm that the CW starts “HI DE NIWAKA JAPAN …”

A  telemetry decoder for Windows is available at http://turing.cs.fit.ac.jp/~fitsat/CWFM/FITSAT_CW_Analyzer1.zip

Takushi Tanaka JA6AVG will announce news about FITSAT-1 such as the LED experiments at http://www.fit.ac.jp/~tanaka/fitsat.shtml

Watch the deployment live at http://www.ustream.tv/nasahdtv

‘Keps’ for CubeSats are at http://celestrak.com/NORAD/elements/cubesat.txt