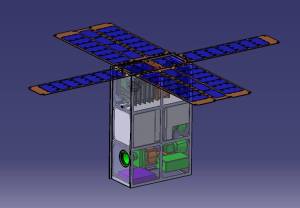 A student team from Embry-Riddle Aeronautical University’s Prescott Campus recently flew a payload on a NASA balloon launched from the Columbia Scientific Balloon Facility in Fort Sumner, N.M. The High-Altitude Student Platform (HASP) flight gave 12 universities from across the nation the chance to conduct research and experiments.

After floating successfully for more than 10 hours at an altitude of 125,000 feet, the HASP gondola containing the payloads was recovered near Wickenburg, Ariz. Embry-Riddle student lead Zach Henney reports that the team is still analyzing the flight data but the results look promising so far.

The Embry-Riddle payload on the HASP flight was an early engineering model of the EagleSat, a small cube-shaped satellite (CubeSat) the students are developing to fly in Earth orbit in late 2015 through NASA’s highly selective CubeSat Launch Initiative. Among its objectives, EagleSat is designed to determine error rates in electronic parts exposed to space radiation. The Embry-Riddle students plan to launch an advanced EagleSat engineering model on next year’s HASP flight.