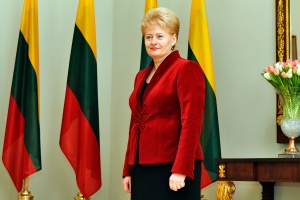 In 2013 the President of the Republic of Lithuania, Dalia Grybauskaitė visited the Science Communication and Information Center (SCIC ) at Vilnius University. There she saw the amateur radio CubeSat LituanicaSAT-1 and tested the satellite’s FM voice transponder with a handheld radio using the call sign LY5N.

LituanicaSAT-1 was launched to the International Space Station (ISS) on January 9, 2014 and was deployed with other amateur radio satellites on February 28.

The tiny satellite is just 10x10x10 cm with a mass of 1.090 kg yet it has a VGA camera and a 145/435 MHz FM voice transponder, designed and built by Lithuanian radio amateurs.

The prototype of the FM repeater has been operating in the home of its designer Žilvinas Batisa LY3H in Elektrėnai, Lithuania. Further information at http://ly3h.epalete.com/?p=303

Watch this video of President Dalia Grybauskaitė and LituanicaSAT-1