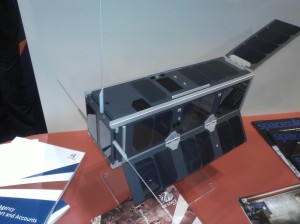 UKube-1 on display at UK Space Conference in Glasgow

The FUNcube team have received confirmation that UKube-1, which is hosting the FUNcube-2 payload, remains scheduled for a Soyuz launch on June 19. The team do not, as yet, have any lift-off times or TLE’s for this launch but we will make these available as soon as possible.

It is believed that, immediately after deployment and activation, UKube-1 will commence transmitting a CW beacon and that this will be later followed by an AX25, 1k2 BPSK beacon. Both beacons will be on 145.840 MHz. The FUNcube-2 payload, with its telemetry downlink for educational outreach, is expected to be tested later.

FUNcube-3 is the transponder only payload on the QB50 precursor CubeSat “QB50P1″. This mission is currently scheduled to launch “Not earlier than the second half of June” , on a Dnepr LV from Yasny. The initial beacon signals, from the main transceiver, are also expected to be AX25, 1k2 BPSK packets on 145.815 MHz. Again more information will be provided as soon as it becomes available.