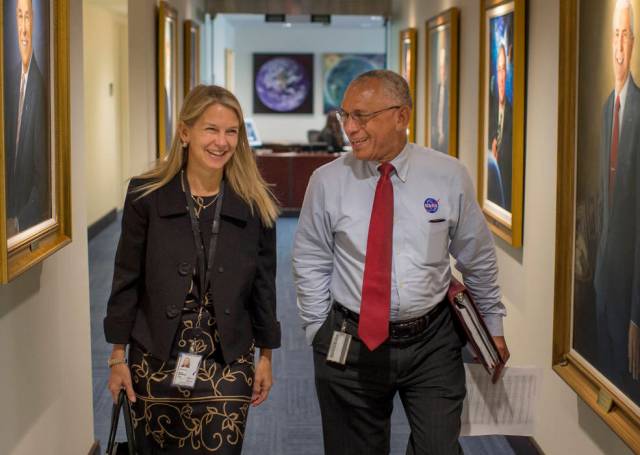 Dava Newman KB1HIK started her official duties as NASA’s new deputy administrator on Monday at the agency’s headquarters in Washington.

Newman was nominated in January by President Obama, confirmed by the Senate in April and sworn in on Friday, May 15. The deputy administrator position had been vacant since the departure of Lori Garver in September 2013.

“I have known and admired Dava for several decades,” said NASA Administrator Charles Bolden (formerly KE4IQB). “Her talents and skills as an educator and technological innovator will bring a new energy to our NASA leadership team, and I’m ecstatic to have her on board.”

Along with Bolden, Newman is responsible to the agency administrator for providing overall leadership, planning, and policy direction for NASA. Newman will perform the duties and exercises the powers delegated by the administrator, assists the administrator in making final agency decisions, and acts for the administrator in his absence by performing all necessary functions to govern NASA operations and exercises the powers vested in the agency by law. Newman also is responsible for articulating the agency’s vision and representing NASA to the Executive Office of the President, Congress, heads of federal and other appropriate government agencies, international organizations, and external organizations and communities.

“I’m very excited to be at NASA,” said Newman. “I’m looking forward to being a part of the agency’s work to expand humanity’s reach into space, advance our journey to Mars and strengthen America’s leadership here at home.”

Prior to her tenure with NASA, Newman was the Apollo Program Professor of Astronautics at the Massachusetts Institute of Technology (MIT) in Cambridge. Her expertise is in multidisciplinary research that encompasses aerospace biomedical engineering.,

Newman is the author of Interactive Aerospace Engineering and Design, an introductory engineering textbook published by McGraw-Hill, Inc. in 2002. She also has published more than 250 papers in journals and refereed conferences.