The QB50 constellation of  fifty CubeSats should be shipped to the International Space Station (ISS) in December 2016 for subsequent deployment. 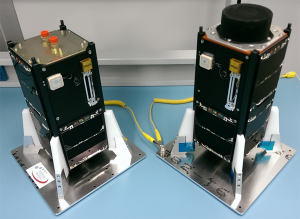 The CubeSats are planned to be deployed from the ISS using the Japanese Experiment Module (JEM) and the Nanoracks CubeSat Deployers.

Eight NanoRacks deployers are installed on the Multi-Purpose Experiment Platform (MPEP). Each deployer has a capacity of 6U and so can hold up to six 1U, three 2U or two 3U CubeSats. They are carried by Japanese Experiment Module-Remote Manipulator System (JEM-RMS).

Mineo Wakita JE9PEL has made available a spreadsheet showing the 50 satellites and their frequencies. A copy can be downloaded from the JE9PEL site.