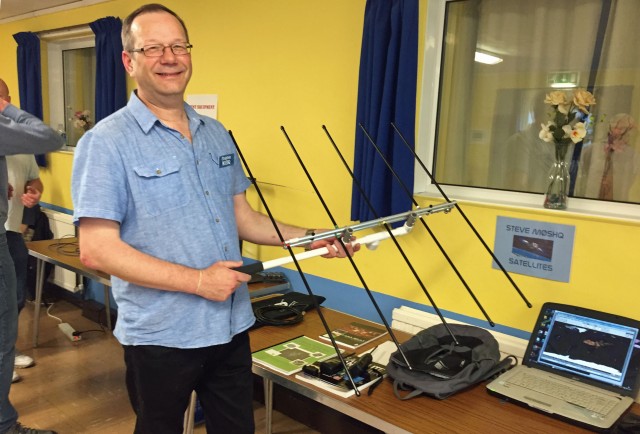 Steve Hedgecock M0SHQ explained how to operate via the amateur radio satellites at Skills Night hosted by the Chelmsford Amateur Radio Society on Monday, June 20, 2016.

He showed how to use the Elk dual-band 145/435 MHz Log Periodic Antenna to track the satellites and make contacts over thousands of kilometres using just 5 watts from a handheld transceiver.

Steve described how he recently managed to use the AO-85 satellite to contact the Isle of Arran DXpedition station GS3PYE using 5 watts and just the handheld’s quarter wave whip antenna. It should be noted though that a small handheld Yagi is recommended for AO-85.

As part of his display Steve had the popular book Getting Started with Amateur Satellites which is an excellent introduction for newcomers.

Sam Jewell G4DDK with one of his popular Microwave antennas

Also attending the Skills Night was long-time supporter of AMSAT-UK Sam Jewell G4DDK. He brought along his stall of UHF/Microwave antennas, pre-amps and other useful accessories.

Dave Powis G4HUP had his extensive selection of his kits, plus tools for working with SMD (Surface Mount Devices). During the evening he provided advice to attendees on a range of RF and construction related topics.

Both Dave and Sam have been regular attendees at the AMSAT-UK International Space Colloquium in Guildford which this year takes place July 30-31, further information at https://amsat-uk.org/colloquium/

Further information on the monthly Skills Night meetings can be found at http://g0mwt.org.uk/skills