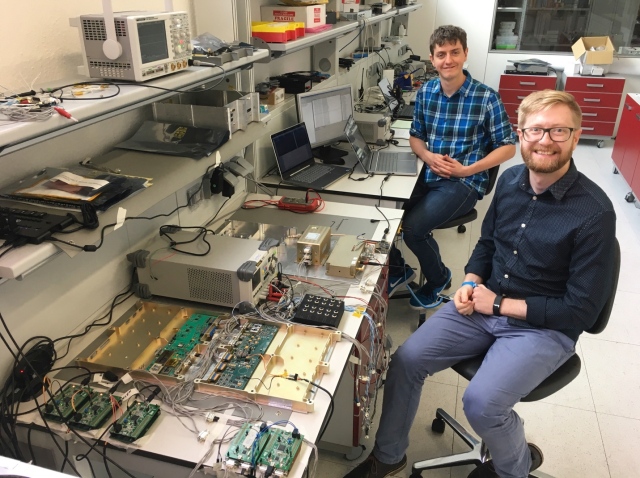 A team of three from AMSAT-UK and Surrey Space Centre visited Forli in Italy in mid-October where the Engineering Model of the ESEO satellite is being assembled.

ESEO, The European Student Earth Orbiter, is a 50 kg satellite from ESA Education incorporating payloads from AMSAT-UK and Universities around Europe.

The AMSAT-UK FUNcube-4 payload will provide a 1260/145 MHz FM transponder and 145 MHz 1200 bps BPSK telemetry beacon to provide a telemetry downlink that can be easily received by schools and colleges for educational outreach purposes. The data will be displayed in an attractive format and provide stimulation and encouragement for students to become interested in all STEM subjects in a unique way.

The target audience is primarily students in Secondary and Higher education, the project includes the development of a simple and cheap “ground station” operating on VHF frequencies in the Amateur Satellite Service. The ground station would comprise an omni-directional antenna feeding a FUNcube DonglePRO+ SDR receiver which will receive the signals direct from the satellite and transfer the data to specially developed graphical software running on any Windows laptop.

During the visit to Forli, the team began work integrating the AMSAT-UK payload into a FlatSat version of ESEO at the facilities of Sitael, who are the prime contractor for the mission. One of the main objectives was to check communication between the payload’s CAN bus, the ESEO On-Board Data handling system (OBDH) and the science payloads. Until now the communication between units, using the CAN-Open protocol had only been simulated as each part of the satellite had been assembled in a different part of Europe. After a tense few hours and a few inevitable refinements to the firmware, data started flowing as planned and another milestone had been achieved.

When on orbit, the ESEO AMSAT-UK payload will transmit telemetry on 145.930 MHz at 1200 bps for educational outreach in a similar way to the FUNcube-1 satellite (AO-73). Additionally, In the event of a failure of the main 2.2 GHz S-Band transmitter, the payload will act as a redundant communications system for transmitting science data. To achieve this the payload can increase its transmission rate to 4800bps.

The team also carried out a fit check for the circular polarised L band patch antenna and checked out the L band to VHF FM transponder.

The flight model of ESEO is due to be delivered at the end of  the 2nd quarter of 2017. An Invitation to Tender for the launch has been issued by ESA.

Watch An RF look at ESEO by David Bowman G0MRF