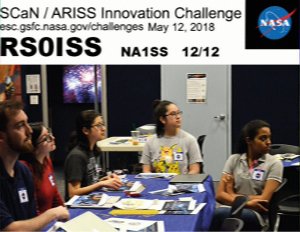 Helping to support the event will be NASA’s Space, Communication and Navigation (SCaN) Department.

Just as in past ARISS SSTV commemorations, twelve images will be downlinked, but this time with six featuring the SCaN educational activities while the other six images will commemorate major NASA anniversaries, ie., when NASA was established, astronauts first landing on the moon, etc.

In addition to the fun of receiving these images, participants can qualify for a special endorsement for the NASA On The Air (NOTA) celebration event. To learn more about NOTA visit https://nasaontheair.wordpress.com/

Once received, images can be posted and viewed at
http://www.spaceflightsoftware.com/ARISS_SSTV/index.php

The transmissions are expected to be broadcast at the usual frequency of 145.800 MHz using the PD-120 SSTV mode.

Please note that the event is dependent on other activities, schedules and crew responsibilities on the ISS and are subject to change at any time.

Note the ISS transmissions use the 5 kHz deviation FM standard rather than the narrow 2.5 kHz used in Europe. If your transceiver has selectable FM filters try using the wider filter. Handheld transceivers generally have a single wide filter fitted as standard and you should get good results outdoors using just a 1/4 wave whip antenna.

If you receive a full or partial picture from the Space Station your Local Newspaper may like to know http://www.southgatearc.org/news/2016/july/now-is-a-great-time-to-get-ham-radio-publicity.htm

The RSGB produce a handy Media Guide and Template press release for anyone to download and adapt, see http://rsgb.org/main/clubs/media-guide-for-affiliated-societies/

An example of the publicity you can get for the hobby by telling your Local Newspaper
https://amsat-uk.org/2015/04/15/iss-sstv-in-the-press/