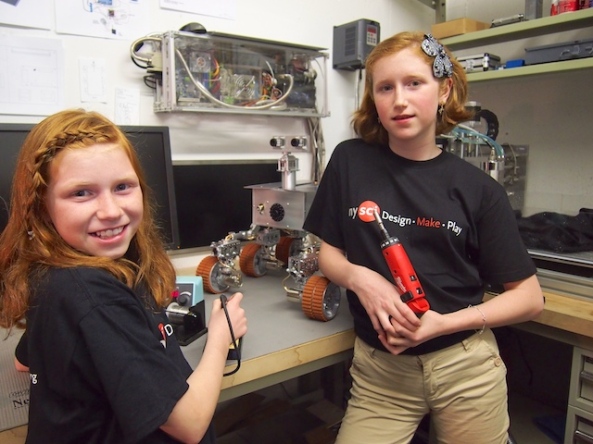 In the workshop building the Rover – Image credit Beatty Robotics

The Mars rover Curiosity was launched from Cape Canaveral on November 26, 2011, at 15:02 UT aboard the Mars Science Laboratory (MSL) spacecraft and successfully landed on Aeolis Palus in Gale Crater on Mars on August 6, 2012, 05:17 UT. 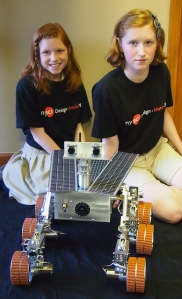 Venture Beat reports that two sisters, Camille and Genevieve Beatty, aged 11 and 13, have built a Mars rover in a workshop in their family’s garage. They have been invited to the New York Hall of Science to show off their rover as part of a special exhibit on astronomy. The rover will roam around a mini-Martian landscape and analyze rocks with hidden heat lamps embedded inside.

Read the blog detailing the building of the rover at http://beatty-robotics.com/category/blog

The sisters are also interested in wireless telegraphy see http://beatty-robotics.com/lunamoth-and-julajay-work-on-wireless-telegraph

NASA officials and crew members aboard the International Space Station will observe the first anniversary of the Curiosity rover’s landing on Mars at a public event in Washington from 16:00-17:30 UT (12-1:30 p.m. EDT) Tuesday, August 6.

The event will be broadcast on NASA Television and streamed live on the agency’s website.

Media and the public are welcome to attend to hear highlights from the Mars Science Laboratory’s first year of investigations, learn about upcoming NASA robotic missions to the red planet, and speak with astronauts conducting experiments in space that will enable human exploration of Mars in the 2030s.

The Mars Science Laboratory mission successfully placed the one-ton Curiosity rover on the surface of Mars on Aug. 6, 2012, UT, about 1 mile from the center of its 12-mile-long target area.

Within the first eight months of a planned 23-months primary mission, Curiosity met its major science objective of finding evidence of a past environment well-suited to support microbial life. With much more science to come, Curiosity’s wheels continue to blaze a trail for human footprints on Mars.

For more information about NASA’s exploration of Mars, visit: http://www.nasa.gov/mars

For more information about the International Space Station, visit: http://www.nasa.gov/station 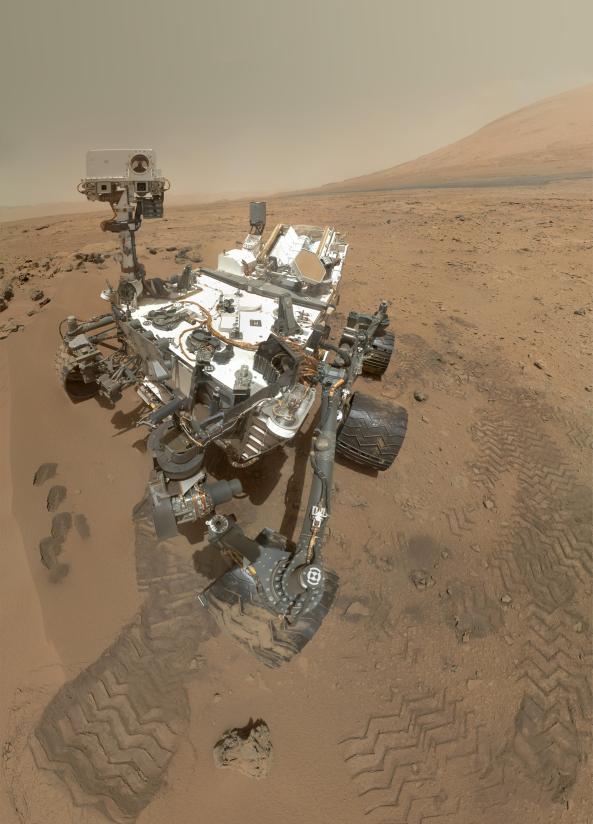 George Boorer ZL3PN has been interviewed on Radio New Zealand because his name and amateur radio callsign is encoded on a chip aboard the Mars Rover Curiosity.

END_OF_DOCUMENT_TOKEN_TO_BE_REPLACED

Prior to the Curiosity Mars landing this morning Aug 6, The Canberra Times interviewed radio amateur Len Ricardo VK1ALR, operations manager at the Canberra Deep Space Communication Complex, who will be providing a communications link for the Mars Curiosity Rover.

END_OF_DOCUMENT_TOKEN_TO_BE_REPLACED

NASA’s most advanced Mars rover Curiosity has landed on the Red Planet. The one-ton rover, hanging by ropes from a  rocket backpack, touched down onto Mars Monday, August 6 UT to end a 36-week flight and begin a two-year investigation.

END_OF_DOCUMENT_TOKEN_TO_BE_REPLACED 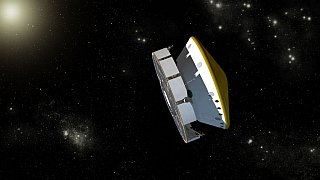 On November 26, 2011 at 15:02 UTC the Mars Science Laboratory (MSL) successfully launched on an Atlas V 541 from the Cape Canaveral Air Force Station Space Launch Complex 41. It is carrying Curiosity, a 900 kg rover about the size of a small car.

It is expected to arrive at the “Red Planet” in August 2012 after a nine month flight.

Just over 7 hours after launch at 21:45 UTC the X-band telemetry signal from the MSL was received using the Bochum amateur radio facility. The signal, received at a distance of 112,000 km, had a spin-modulation of +/- 3.5 Hz with 2 revolutions / minute.

This is believed to be the first reception of the MSL outside the official NASA Deep Space Network (DSN) and the USN tracking station at Dongara, Australia (under contract to JPL for the MSL launch). 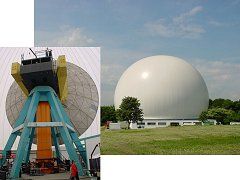 For reception of MSL James Miller G3RUH remotely reconfigured the Bochum tracking and receiving system. The MSL X-Band telemetry signal was received automatically in Bochum, no-one had to be physically on-site. This shows how flexible and reliable the system at Bochum is, ready for the planned AMSAT-DL P5-A mission to Mars.

The 20m dish at Bochum is also used by AMSAT-DL to automatically receive real-time solar data from the NASA STEREO A / B satellites. The data is transmitted to a NOAA server in the USA via the Internet.

Congratulations to the AMSAT-DL team on a remarkable acheivement.