Der Spiegel newspaper features an article about the hopes of radio amateurs to transmit commands to control the NASA ISEE-3 / ICE spacecraft.

The article quotes David Dunham as saying “Radio operators have only one attempt. It might take 200 years before ICE is close enough to Earth again”.

Radio amateurs have received signals over a distance of 43 million km from the NASA ISEE-3 / ICE deep space probe which was retired from service in 1997.

AMSAT-DL have released this statement:

On March 1st and 2nd, 2014 radio amateurs were able to detect the beacon signal from the retired NASA deep space probe ICE (International Cometary Explorer) at the Bochum Observatory (Germany). After some changes to the ground equipment and aligning the receive antenna to the predicted position in the sky, the beacon signal could positively be identified due to its frequency, the position in the sky and the frequency shift due to the radial velocity (Doppler shift).

For this detection the 20m radio telescope from the Bochum Observatory was used. In 2003, AMSAT-DL converted this former industrial monument into a fully functional groundstation for deep space probes. Since 2009 the facility is being used by volunteers almost full time as ground receive station for data from the STEREO mission with its two spaceprobes monitoring the sun from different viewing angles.

The International Sun-Earth Explorer 3 (ISEE-3) was launched in 1978 and became the first spacecraft to orbit the Earth-Sun L1 Lagrange point, measuring the interaction between the Earth’s magnetic field and the Sun. It was the first spacecraft to detect the stream of particles (“solar wind”) approaching Earth. In 1982, the spacecraft was renamed the “International Cometary Explorer” (ICE) and diverted to the Moon, where its gravitational pull placed ICE on a heliocentric orbit. In 1985, the comet Giacobini-Zinner was visited (the first time a comet had been encountered by a spacecraft), followed by observation of Halley’s Comet in 1986. 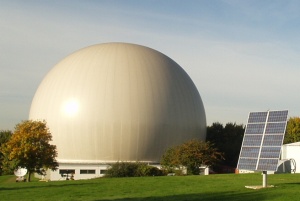 While the instrumentation on board was still functional and fuel for more trajectory maneuvers was available, support for the ICE mission was terminated in 1997, though the spacecraft transmitter was left on. It was last detected by the NASA Deep Space Network in 2008. Its orbit however results in the spacecraft returning to Earth-Moon space in August of 2014. A small propulsive maneuver and lunar flyby could allow ICE to be directed into an Earth-Sun L1 halo orbit and perhaps resume a science mission, depending on instrument health. However in February 2014 a NASA study determined that the required resources to contact the spacecraft were not available anymore and due to budgetary constraints no further contact attempts were planned. In light of the recent observations and the available facilities in Bochum, additional studies about the economic feasibility to add a suitable uplink are being done.

We would like to thank Jeremy Bauman from KinetX Aerospace (Tempe AZ, USA) for providing the ICE trajectory solution which was essential in finding the spacecraft and Jon D. Giorgini from the Jet Propulsion Laboratory (Pasadena CA, USA) for his support.

ISEE-3 ICE spacecraft signal spectrum recorded on March 2, 2014 at 1822 UT using the 20m dish antenna of Bochum Observatory, Germany. Range 43M km, azimuth 230°, elevation 49°. Average of 2 spectra spanning 2.1 seconds. With a bin bandwidth of 1.6 Hz, the SNR of 15.8 dB equates to a CNR of 17.8 dB. Indicated frequency is relative to the programmed center frequency of 2217.5 MHz of the measurement equipment.

The satellite carries Redundant S-band transponders, each with 5 Watt RF output but it is now only transmitting a carrier signal. The following information is from the ISEE-3/ICE Telecommunications Summary http://mdkenny.customer.netspace.net.au/ISEE-3.pdf