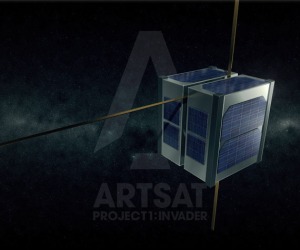 Berlin-based Japanese sound poet/performer/composer, Tomomi Adachi and Japanese Media Artist, Akihiro Kubota will send a program code to ART satellite ARTSAT1:INVADER, the artificial satellite will interpret the code, perform a sound poem in the orbit with a voice synthesizer chip, and broadcast the voice directly to the earth by radio a few times in two weeks from June 21, 2014 (the solstice). The broadcasting will reach many major cities in the world. Probably this is the first experiment of sound art and experimental poetry in outer space by human beings. 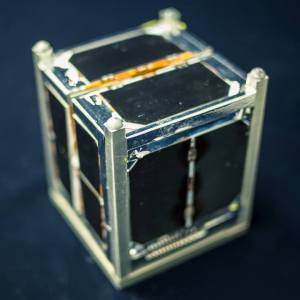 Times and places of the broadcasting will be announced just before the performance on http://cosmicpoem.wordpress.com/, http://artsat.jp/ and https://twitter.com/CosmicPoem, https://twitter.com/INVADER_ARTSAT.
The poem will be repeated several times in one place. It is a very short poem, of less than 30 seconds with the repetition. Also, please understand that this is an experiment in outer space, the satellite might fail the performances. We try again in that case. For this reason, we recommend you to follow our twitter accounts.
There are three ways to listen to the sound poem:

1. The satellite broadcasts using 437.200 MHz frequency with FM. Prepare a receiver that covers this frequency, then direct an antenna to the satellite. For details, check this site http://makezine.com/projects/make-24/homemade-yagi-antenna/
If you succeeded in recording the sound, it is recommended sending the recording to http://api.artsat.jp/report/ or cosmicpoem@gmail.com
These recordings will be published on http://artsat.jp/ and http://cosmicpoem.wordpress.com/
This would be the mechanical method to listen for people who has rich technical knowledges

2. After the performances, the sounds recorded on the earth will be uploaded into internet sites http://artsat.jp/ and http://cosmicpoem.wordpress.com/ The sounds will be from then on available at the site.
This is the easiest method to listen.

3. Look up at the sky. Imagine the 10 cm cubed small satellite that is moving at an altitude of about 340km with a speed of 7.7km per a Second, and the voice which is synthesized in outer space. Try to listen to the sounds with your imagination. To face toward the satellite is effective. It is really appreciated if you write down what you listened in your mind or make an audio recording of the sound in your imagination then send it to cosmicpoem@gmail.com (please don’t attach files more than 10MB). These materials will be published on http://artsat.jp/ and http://cosmicpoem.wordpress.com/
This is a creative method to listen.

Schedule for the first and second performances in this weekend!

Due to a limitation in the satellite’s memory capacity (128 bytes), the poem needs to be short. Still, it contains many cultural references. Firstly, this is sound poetry which doesn’t have any linguistic meanings. The idea of sound poetry is coming from Dadaism in 1910-20s. Dadaist abandoned meanings of language and tried to attain universal language over restrictions of particular language. Sound poetry opened the door not only to experimental poetry, but also to sound art, and noise music. So we see this early experiments as a great precedent of universal language for outer space. The poem has indeed direct quotations from Poster Poem by Raoul Hausmann, one of representative figures of Berlin Dada. Also the Poster Poem is known as a source of monumental sound poem for Kurt Schwitters’ Ursonate.

Part of the cosmic poem is also inspired by Japanese writer, INAGAKI Taruho, whose 1910-20s novels focus on imagined narratives of flight and astronomy.
The poem is a homage to cosmopolitanism in the 1910-20s, which we find very suitable for cosmic imagination. Still, its format is similar to that of traditional Japanese Tanka, a short poem that has a 5-7-5-7-7 syllabic structure. We adopted this form because it works as a form of short code. Moreover, the voice synthesizer chip in the satellite is specialized in Japanese phonetic system. There are inserted phrases in the basic structure that have a direct phonetical connection to Hausmann’s poem. The phrases are also understood as a lament for Laika, the first telluric animal that made sounds on orbit with Soviet spacecraft Sputnik 2 on November 3, 1957. Possibly Laika died in several hours in the spacecraft from overheating.

This poem is written as a program code for a computer on the satellite. The computer interprets the code each time, each performance is slightly different. In this respect, this performance is not so distant from a regular performance by humans.

Probably, this cosmic poem is the first experimental poetry/sound art practice in outer space. Or maybe the second one, if really Lucia Pamela made her recording of Into Outer Space With Lucia Pamela on the moon in 1969.

The now-developing art satellite “ARTSAT1: INVADER” is 10cm cubed, and weighs 1.8kg, it was launched on Feb. 28 2014. The “ARTSAT Project” carries the plan of creating the world-first art satellite forward; the satellite that will be used mainly for art.
To trace the position of INVADER, see
http://artsat.jp/en/invader

Tomomi Adachi (Artist)
Tomomi Adachi is a performer/composer, sound poet, instrument builder and visual artist. Known for his versatile style, he has performed his own voice and electronics pieces, site-specific compositions, improvised music and contemporary music works by John Cage, Cornelius Cardew, Christian Wolff and others in all over the world including Tate Modern, Maerzmusik, Centre Pompidou, Poesiefestival Berlin, Merkin Hall, Tempelhof Airfield, STEIM and Experimental Intermedia. As the only Japanese performer of sound poetry, he performed Kurt Schwitters’ “Ursonate” as a Japan premiere in 1996. Also he directed Japanese premiere of John Cage’s “Europera5” in 2007. CDs include the solo album from Tzadik, Omegapoint and naya records. He was a guest of the Artists-in-Berlin Program of the DAAD for 2012.
http://www.adachitomomi.com/

Akihiro Kubota (Artist / Professor, Tama Art University)
Born in 1960 in Osaka, KUBOTA is a professor of the Art & Media Course in the Information Design Department of Tama Art University. He earned his doctorate at the University of Tokyo School of Engineering. He has pioneered the development and synthesis of a broad spectrum of hybrid creative endeavors, including satellite art (artsat.jp), bioart (bioart.jp), digital fabrication (fablajapan.org), and sound performance with instruments he has invented (hemokosa.com). He is the author of Kieyuku Computer (Disappearing Computer–Human Interface; Iwanami Shoten, 1999), editorial supervisor of Post-Techno(logy) Music (Ohmura Shoten, 2001), and translation supervisor of the Japanese editions of FORM+CODE in Design, Architecture, and Art (Casey Reas, Chandler McWilliams, LUST; BNN, 2011) and Visual Complexity: Mapping Patterns of Information (Manuel Lima; BNN, 2012) etc.
http://hemokosa.com/

Masahiro Sanada JI1IZR reports the amateur radio CubeSat ARTSAT1:INVADER (CO-77) is in trouble and asks radio hams to listen for the satellite and report any reception.

ARTSAT1:INVADER, one of the CubeSats, is in trouble that the satellite does not reply after the command by the command station.

The members are trying to find out how to recover.

We have no reply from the satellite, nor the CW [437.325 MHz] becomes not to be heard after the command.

When you have a chance to listen to the satellite, please send your report via the form at:
http://api.artsat.jp/report/

Your report will be great help for the members.

We appreciate your help very much.
Thank you.

INVADER is an amateur radio “Art Satellite” developed by students at the Tama Art University as a part of the “ARTSAT: Art and Satellite Project” which aims at a practical use of a satellite for art and design.

The ARTSAT Project Leader Akihiro Kubota said “We would like to express best thanks to AMSAT-NA and all of you”.

INVADER is an amateur radio “Art Satellite” developed by students at the Tama Art University as a part of the “ARTSAT: Art and Satellite Project” which aims at a practical use of a satellite for art and design.

Reports of ARTSAT1:INVADER reception can be submitted online at http://api.artsat.jp/report/

Information on obtaining an OSCAR number for your satellite can be found on the OSCAR Numbers Policy page at http://www.amsat.org/?page_id=2478

The ARTSAT1:INVADER CubeSat team have announced that QSL cards will be available for reception reports of the amateur radio satellite.

INVADER will launch from the Yoshinobu Launch Complex at the Tanegashima Space Center on Thursday, February 27 at 1837 UT. It will be deployed from the launcher at 1916 UT, antenna deployment takes place at 1920 UT and then its CW (A1A) beacon on 437.325 MHz (+/- 10 kHz Doppler shift) should start transmitting.

Watch the launch live at http://www.jaxa.jp/countdown/f23/index_e.html

The CubeSat carries a low-resolution camera, 1200 bps FM AX.25 Packet Radio and a FM Digitalker. These will operate on a downlink frequency of 437.200 MHz.

Further details of INVADER and the other amateur radio satellites that will be on the same launch at
https://amsat-uk.org/2014/02/23/launch-of-japanese-amateur-radio-satellites/

Students at the Tama Art University are planning to send a sculpture ARTSAT2 DESPATCH along with an amateur radio payload into deep space.

The ARTSAT2 Deep Space sculpture “DESPATCH” is planned to launch in mid 2014 on a H-IIA rocket with the asteroid explorer Hayabusa 2 as the main payload. Hayabusa 2 will be making a round-trip to the C-type asteroid 1999 JU3 arriving at the asteroid in mid 2018.

The sculpture, which is 50 by 50 by 45 cm with a mass of 30 kg, was developed at the Tama Art University using a 3D Printer. The containment vessel will carry a CW beacon in the 435 MHz band using an omni-directional antenna. The satellite should provide the ultimate in ham radio DX reception when at its maximum operational distance of 3 million km from Earth about a week after launch. Being battery powered without solar panels it will have a low transmit cycle to maximize the lifespan.

The students have already developed the INVADER CubeSat which is planned to launch in 2014, see
https://amsat-uk.org/2012/04/12/invader-cubesat-a-student-art-satellite/

The University of Tsukuba CubeSat ITF-1 YUI “Binding” support project was there. The formal name ITF-1 comes from the initial letter of the university slogan “Imagine The Future”.  The satellite also has a popular name YUI which means bond or binding in Japanese, it came from the project’s concept‚ “Creating the Worldwide Human Community”.

The ITF-1 satellite beacon on 437.525 MHz will send telemetry by a Morse Code audio tone on an FM transmitter running 300 milliwats output. It should be possible to receive it using simple equipment such as a handheld transceiver or scanner.

According to the ITF-1 website the “Binding” support project is organized by the student volunteers to support the construction of a consolidated network and expand public relation activities with the aim of encouraging many reception reports when the satellite is launched.  ITF-1 will fly with the primary payload the Global Precipitation Measurement Dual-Frequency Precipitation Radar GPM-DPR satellite in 2014.

The ARTSAT stand featured the Invader CubeSat which is being developed by students at Tama Art University. The IARU has coordinated 437.325 MHz and 437.200 MHz for Invader which aims to have a camera for Earth imaging and a Digi-Talker, to transmit voice data using FM. Invader will be on the same launch as ITF-1.

SPROUT will have a digi-talker and will transmit, using Slow Scan TV (SSTV) and FM packet, pictures of the Earth taken by an on-board camera. It is believed that radio amateurs will be able to make use of the digipeater and possibly even command when pictures are taken.