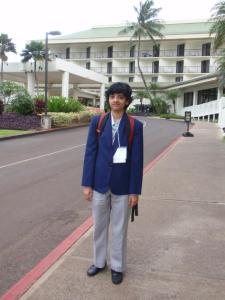 At the meeting Deepti Kannapan presented her paper on a new attitude control algorithm developed as a part of her Dual Degree Project. This algorithm is being implemented in the IIT Madras Student Satellite (IITMSat) that is being developed by students at the Indian Institute of Technology Madras.

IITMSat Primary Mission Objectives:
• To design, fabricate, test and launch a small-satellite (15kg), that demonstrates all features of satellite functioning, and build a ground station for collection of data from the satellite
• To measure the energy spectrum of protons and electrons beneath the inner-Van Allen radiation belt boundary (600-800 km) to aid earthquake prediction studies
• Interpret the data received from the satellite and analyze the effects of solar flares, lightning storms and seismic activity on the radiation belts