KickSat-1 is an amateur radio CubeSat technology demonstration mission designed to demonstrate the deployment and operation of 128 prototype Sprites (also referred to as ChipSats or femtosatellites) which were developed by radio amateur Zac Manchester KD2BHC at Cornell University.

315 individual sponsors donated $74,586 to the project through the crowd-source funding website Kickstarter.

It the UK both the British Interplanetary Society (BIS) and London Hackspace are developing Sprites for this mission.

ChipSats like the Sprite represent a disruptive new space technology that will both open space access to hobbyists and students and enable new types of science missions.

The Sprite is a tiny spacecraft that includes power, sensor, and communication systems on a printed circuit board measuring 3.5 by 3.5 cm with a thickness of 2.5 mm and a mass of about 5 grams. It is intended as a general-purpose sensor platform for micro-electro-mechanical (MEMS) or other chip-scale sensors with the ability to downlink data to ground stations from LEO.

KickSat is a 3U CubeSat being built to carry and deploy the Sprites. A 1U avionics bus will provide power, communications, and command and data handling functions. A 2U deployer has been developed to house the Sprites. Approximately 128 will be stacked atop a spring-loaded pusher and secured by a nichrome burn wire system.

After being released from the P-POD, KickSat will perform a de-tumble maneuver and establish communication with Cornell’s ground station. After check-out, the spacecraft will be put in a sun-pointing attitude and spun up to maintain that attitude.

The Sprites are expected to reenter the atmosphere and burn up within a few days or weeks depending on atmospheric conditions. The maximum orbital lifetime is estimated at 6 weeks.

Zac Manchester KD2BHC has said they are aiming for the Sprites to be receivable using an AMSAT-UK FUNcube Dongle SDR.

The current KickSat and Ground Station source code is available at https://github.com/zacinaction/kicksat

KickSat – a personal spacecraft of your own in space http://www.uk.amsat.org/?p=2164

On Monday, November 26 at 12:10 CET Swedish Radio broadcast a show about the Maker Movement that included an item on Hojun Song DS1SBO and the OSSI CubeSat that is planned to launch on a Soyuz-2-1b rocket into a 575 km 63° inclination orbit in April 2013.

The item featuring Hojun Song DS1SBO started about 1:20 into the show and the MP3 can be downloaded from http://sverigesradio.se/topsy/ljudfil/4274449.mp3

A picture and details of the show in Google English are at http://bit.ly/TlA6B

END_OF_DOCUMENT_TOKEN_TO_BE_REPLACED 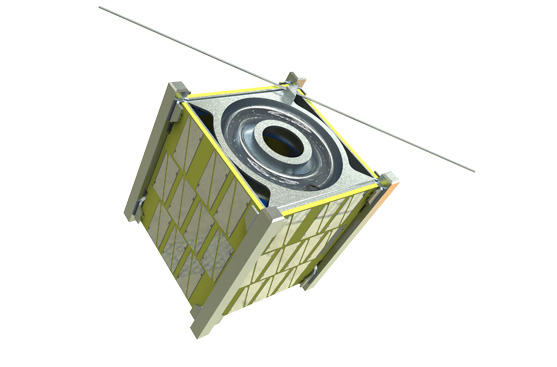 It will carry a Xenon Flash Tube (XFT) subsystem to act as an Optical Beacon that should be visible to the unaided eye of observers on Earth. The Radio Beacon is planned to operate in the 435-438 MHz band.

END_OF_DOCUMENT_TOKEN_TO_BE_REPLACED

On September 10, the “MENTOR Makerspace” program kicked off with a special event held at the College of San Mateo. The MENTOR Makerspace program has a goal of introducing low-cost makerspaces into 1,000 high schools over the next three years.

NASA’s Matthew Reyes attended the event and in this interview with Tony Wan he explains how students from San Jose State University went from tinkering in their local TechShop to exploring the final frontier.

END_OF_DOCUMENT_TOKEN_TO_BE_REPLACED

The 27th AMSAT-UK International Space Colloquium will be held on the weekend of 15-16 September at the Holiday Inn Hotel, Guildford, GU2 7XZ, England close to the University of Surrey. UPDATE: For a video of the presentation see http://www.uk.amsat.org/?p=10297

END_OF_DOCUMENT_TOKEN_TO_BE_REPLACED

The amateur radio CubeSat OSSI is planned to launch in December according to an Antara News article. [UPDATE rocket launch has been delayed and may now be April 2013]

The article describes how Korean artist Hojun Song DS1SBO developed his own home made satellite and says radio operators will be able to communicate with the satellite. If all goes well, it will repeat a message in Morse code using its LED lights at a set time and location.

The DIY satellite OSSI is planned to launch on a Soyuz-2-1b from the Baikonur launch facility in Kazakhstan in December with the Bion-M 1 and Dove 2 satellites. (The Dove 2 CubeSat will transmit images on a 2.4 GHz downlink). The satellites will be placed into an orbit with an apogee of 575 km, perigee of 290 km and inclination of 64.9 degrees. They are expected to remain in orbit for about a year before burning up on re-entry into the Earth’s atmosphere.

The Times of India Artist makes satellite at home in just $500 http://timesofindia.indiatimes.com/tech/personal-tech/computing/Artist-makes-satellite-at-home-in-just-500/articleshow/15162830.cms