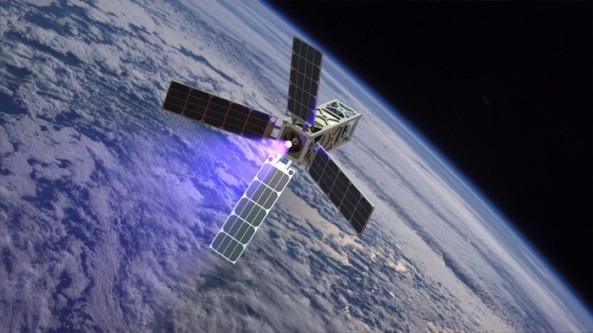 Radio amateurs Benjamin Longmier KF5KMP and James Cutler KF6RFX of the University of Michigan hope to raise $200,000 on Kickstarter for a CubeSat propulsion project.

The CubeSat Ambipolar Thruster (CAT) is a new plasma propulsion system which will push small spacecraft like CubeSats around in orbit or far beyond the Earth. They aim to use the CAT plasma thruster to propel a 5kg satellite into deep space at 1/1000th the cost of previous missions.

Just like a normal rocket that produces thrust from the burning and expansion of hot gases, CAT produces thrust from the expansion of a super-heated 350,000 °C plasma stream. Plasma is an ionized gas that can be accelerated to produce thrust (F=ma).  The force generated by this thruster will be very low (milli-newtons) but very efficient.  The engine will be turned on for long durations, accelerating the spacecraft to much higher velocities than a typical chemical rocket.

First, the propellant will be injected from its storage container into the plasma discharge chamber, a quartz bottle that distributes the gas and contains the plasma. The gas is turned into a plasma by a radio frequency antenna that surrounds the chamber and launches a plasma wave known as a “helicon.” The plasma is then launched out of the quartz bottle and guided by magnetic fields from extremely powerful permanent magnets. As the plasma escapes the CAT engine, this causes an equal and opposite thrust, pushing the satellite in the opposite direction. Unlike conventional rockets, almost any substance can be used as propellant for CAT – even liquid metals or water vapor!

Find out more about the project and watch the video on the Kickstarter site. 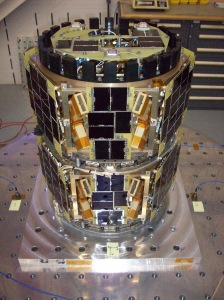 CUSAT is planning a SpaceX launch along with Cassiope and Dande, from Vandenberg into a 1500 by 325 km 80 degree inclination orbit. The satellite has a 2 watt packet radio transmitter and carries Pulse Plasma Thrusters (PPT) which can raise or lower the orbit.

Built by students at Cornell University CUSat-1/2 is a 45 kg space vehicle consisting of two functionally identical satellites that will launch together and separate in orbit. Image and positioning data will be downlinked using AX25 packet radio on 437 MHz. Cross linking between the two parts will also take place on 437 MHz.

Using centimeter accuracy carrier-phase differential GPS, the two satellites will perform autonomous relative navigation. One satellite will capture imagery of the other satellite and send these images to a ground station on Earth for the reconstruction of a 3-D model of the partner satellite.

After launch and Launch Vehicle separation, the satellite will enter its initialization state. During initialize, the satellite will begin a self-check process to detect any malfunctioning systems. The satellite will then use Carrier-phase Differential GPS data to converge on an attitude estimate. CDGPS is a new technique for performing centimeter-level accurate position determination.

Once the attitude estimate for the satellite is determined, the satellite will use its on-board cameras to take images of the Earth, Moon, bright stars, and the ISON comet (C/2012 S1) which will be reaching perihelion in November 2013. If the team are able to take pictures bright stars, then they should be able to determine the attitude of the satellite to help verify the CDGPS estimate of the attitude. The satellite will then telemeter down mission data to the Ground Segment. This data consists of images, GPS data, Telemetry, and Command and Data Handling logs. The satellite maneuvers so that the antenna is always pointed towards the Ground Segment during data transfer.

After all the necessary pictures are taken, the CUSat team will perform test maneuvers using the pulse plasma thrusters. First, they will tilt the spin angular momentum. They do not want to change the magnitude, only the direction of this vector. Secondly, they will raise and lower our orbit of the satellite. In order to raise or lower the orbit, CUSat needs to fire its PPT thrusters in the direction, or against the direction of its velocity, respectively.

An innovative CubeSat Pulsed Plasma Thruster (PPT) was shown at the UK CubeSat Community Workshop attended by AMSAT-UK. The event was organized by the UK Space Agency (UKSA).

Produced by the Southampton based company Mars Space Ltd the unit is claimed to be capable of generating up to 44 Newtons/second of thrust. It could be used to significantly extend the life of a CubeSat in a very low orbit (250-450 km) or to raise or lower the orbit.

The company says the PPT could enable a 1U CubeSat deployed in a 400 km orbit to extend its life before re-entry from 6 months to 15 months.

BBC TV have been filming at the Surrey Space Centre (SSC) and Surrey Satellite Technology Limited (SSTL) for an item on the STRaND-1 CubeSat mission for Stargazing Live.

END_OF_DOCUMENT_TOKEN_TO_BE_REPLACED

Dr Chris Bridges recently appeared on the nationwide TV channel Sky News discussing why space is cool. On September 15-16 he will be giving two presentations to the AMSAT-UK International Space Colloquium at the Holiday Inn, Guildford, GU2 7XZ.

Chris will cover the Nexus Android Smartphone amateur radio satellite STRaND-1 which will carry both a Resistojet and a Pulsed Plasma Thruster (PPT) module and STRaND-2 which comprises two 3U CubeSats that will use Microsoft Xbox Kinect controller technology for docking.

UPDATE: For videos of the two STRaND presentations see http://www.uk.amsat.org/?p=10297

END_OF_DOCUMENT_TOKEN_TO_BE_REPLACED

CubeSats, like STRaND-1, are essential for the breakthrough of new technologies in the space industry. The relatively inexpensive CubeSat enables institutes and companies to test technologies and gain valuable flight heritage without risking millions (or even billions) of pounds of investment.

STRaND-1, the joint project between SSTL and the Surrey Space Centre (SSC), is one of these exciting experimental satellites and it’s not only its smartphone that makes it exceptional. Engineers at the Surrey Space Centre have also developed a unique mass and power saving plasma propulsion system to fly on the satellite. This system will be the first propulsive technology to provide very precise attitude control and pointing.

STRaND-1 will carry both a Resistojet and a Pulsed Plasma Thruster (PPT) module on board. The PPT will consist of eight micro thrusters; four located at the top of the satellite stack and four located at the bottom. The micro thrusters operate by discharging a discrete train of pulses. Each pulse is a plasma discharge that forms between two metal electrodes, much like a small lightning bolt or electrical spark. The spark erodes the metal from the electrodes and electromagnetics accelerate the eroded mass out of the nozzle, which produces thrust. This is known as the Lorentz force.

Surrey Space Centre has developed two ways of minimising mass and volume. Firstly, the electrodes which form the plasma discharge also function as the propellant. As metal is highly dense, more propellant can be stored in a smaller volume than that of conventional chemical propulsion systems. The total weight of the propellant for the whole STRaND-1 PPT system is just 10g.

Not only does SSC’s PPT module reduce mass and volume, it also uses less power than other propulsion systems. Between each pulse, energy is stored in a capacitor. This substantially reduces the power requirements for the thruster, making it perfect for small satellites such as STRaND-1. In fact, the power requirement for the system flying on STRaND-1 is only 1.5W, about the power needed to operate a bicycle light.

If successful, the STRaND-1 PPT will be the first propulsion system to provide full axis control on this class of satellite. Having an active propulsion system in orbit would open up new possibilities for future CubeSat missions like rendezvous and docking, and flyby inspection. The flight heritage and experience gained in using the PPT on STRaND-1 could then be transferred and scaled for other SSTL missions providing a low cost, mass and volume solution for future endeavours.

Read about STRaND-1 in a free sample issue of OSCAR News at http://www.uk.amsat.org/on_193_final.pdf